During the week I always try to keep my meals “light” because on the weekends all hell breaks lose.  (Read: drunk munchies and hangover cures.)  There is a new fad taking shape in Orange County, and Tender Greens is leading the way.

END_OF_DOCUMENT_TOKEN_TO_BE_REPLACED

It is so exciting to me when great LA restaurants make their way to Orange County.  I mean ideally I would rather these places start in OC, but well…you know… So when I found out that Mendocino Farms was opening on 17th Street in Costa Mesa, I couldn’t be more excited.

The first location opened in Downtown LA several years ago.  The lines haven’t stopped since then.  It is a sandwich, salad and soup place that uses fresh ingredients.  It is more than a deli, and it is made to order.  There are strange sandwiches, some normal sandwiches but mostly delicious sandwiches.

Last week, I took some co-workers to try it out.  It was a lot of pressure because if they didn’t like it, it was all my fault.  Luckily they (allegedly) enjoyed it.  The only OBNOXIOUS thing was that our food took over FIFTEEN minutes and we were THEE last people served at the restaurant.  It doesn’t sound like a long time but when you have to bill every minute of your day it felt like an eternity.  (I really am in the curse of poor service lately).  I am hoping that next time I go I can be 100% enthused about of this place because it really is great food!
I have had tons of the sandwiches – the MBT or Not so Fried Chicken are probably my favs – so this time I tried a salad.  I actually was pleasantly surprised.  I got the chicken prosciutto salad and it was SO much food.  It needed more acid (maybe a vinegar dressing instead of olive oil and basil), but I was so full and all the ingredients worked well together that I would actually come back and get a salad – and at a sandwich place, who knew!
4.5/5 because of the god damn poor service, again.
I know, I know, I travel far too much on the weekends, but I like to have fun.  This past weekend was no different and I headed up to Los Angeles for the day.  I started out my morning at easily the best brunch spot I have ever had – Eggslut.

For those that haven’t been to Grand Central Market, it is definitely worth visiting.  Once a hole in the wall locals only spot, trendie LA foodies have started to rent stalls and open up their places in a food cart sort of way.  Eggslut is one of these places and has a counter that you order at then sit at the bar to eat your food.  I ordered the steak sandwich which was legit, and I watched the guy basically pour butter into every part of the steak. (DELICIOUS)  My boyfriend, Phil, ordered one of the breakfast sausage sandwiches.  His by far was the better sandwich.  For $20, we were stuffed and had such a good meal.

Next we went to Stumptown Coffee, you might remember it from my Portland report.  This LA one has a VERY different vibe, is totally LA hipster, and totally a place you go for the “scene.”  It was still great coffee but quite pricey. 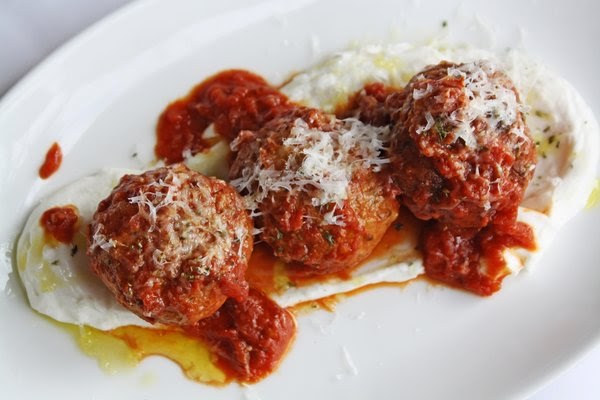 For dinner I met a girlfriend for my birthday (its the beginning of my birth month) at Gusto in West LA.  It was a cute Italian spot full of families, couples, and groups of friends.  The vibe was really nice, and the wait staff was extremely attentive.  The food was really good.  Everything we had was shared plates and homemade Italian plates.  I don’t know what the bill was, but the menu was well priced for what I thought.  It was a little “Beverly Hills” feeling for me but I would definitely come back here for a date or special event.

Now I need to stop eating food for a while…

This weekend is supposed to be fabulous, and there is nothing better than eating outdoors in Southern California. (Just wear sunscreen!)  As you already know, I am a HUGE breakfast burrito fan, and brunch is kinda a big deal in my life so I thought I would share one of my favorite spots – Rose Bakery Cafe.  I am a little scared to share this secret, but it already is packed so what the hell. 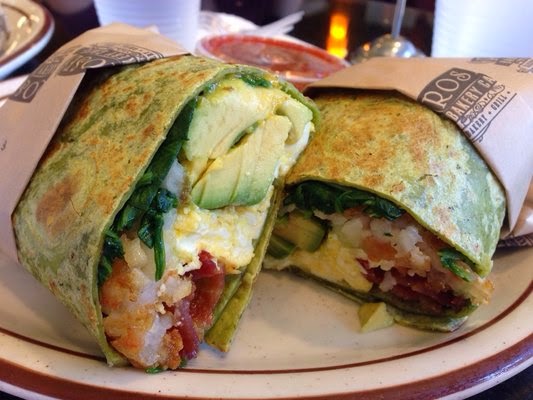 If you aren’t ordering the California Breakfast Burrito with Spinach tortilla, then I recommend any of the other wraps.  As I mentioned before, I tend to order tuna sandwiches to compare sandwich places, and this place knocks my socks off.  Any of the sandwiches or wraps are exceptional, but the best part about Rose is the baked goods.  Fresh made donuts and cakes and goodies galore.  Some might even say that the donuts here are the best in OC (thanks D for the introduction!) 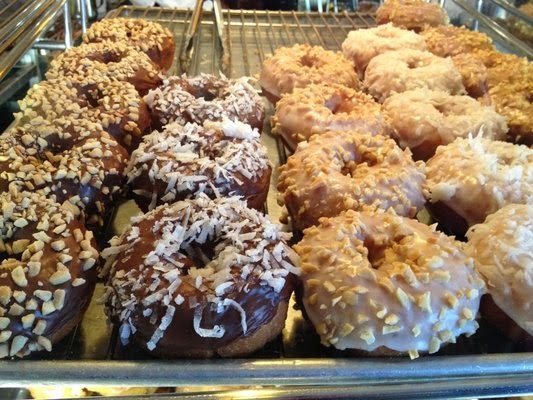 If you are looking for a brunch, if you are hungover and need take out, or if you want to just sit and bask in the sun with some good food and great people watching, this is your spot.  Even John Elway comes here… 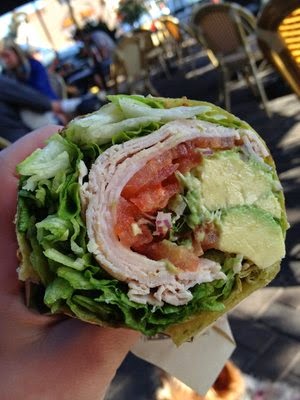 I’d like to say I am a meatball connoisseur, but really I just enjoy a well made meatball.  In New York, I die for all things at The Meatball Shop.  In San Francisco, the traditional Italian meatball sub is my go to at Molinari’s.  And now in San Diego, I have Soda & Swine.

Staged in an outdoor space that has been enclosed, it feels like you are having a picnic outside without having to listen to the cars roll by.  The vibe is very hipster (as most of SD is these days) and is conjoined with Polite Provisions, their sister cocktail restaurant.  If you want, you can order the meatballs at Polite Provisions while you sip some cocktails – I must have died and gone to heaven.

Now to the food.  Without a doubt order the sliders.  These are the perfect sampler size to determine which balls you like the most.  (get your mind out of the gutter people)  I tried the bovine meatballs on a slider and of course got the garlic knots and the french fries.  I only got one slider because (embarrassing moment) we were on our way to lunch.  But believe me I will be back to try each and every one of these bad boys.  And they are open until 1:30 AM!  Who needs bad Mexican food when you got this instead!  Now how to move to San Diego…. 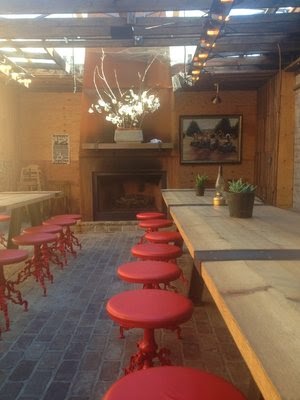 4.5/5 balls – I can’t give it a five until I have tried everything and come back at least one more time.  But its pretty much that good already…

Only an hour away, but a place I haven’t spent much time in, Pasadena can offer an adventurer quite a lot of options for a day trip.  Walking around Old Town can be a good start of fun.  I just so happened to do this and stumbled across the Dog Haus. 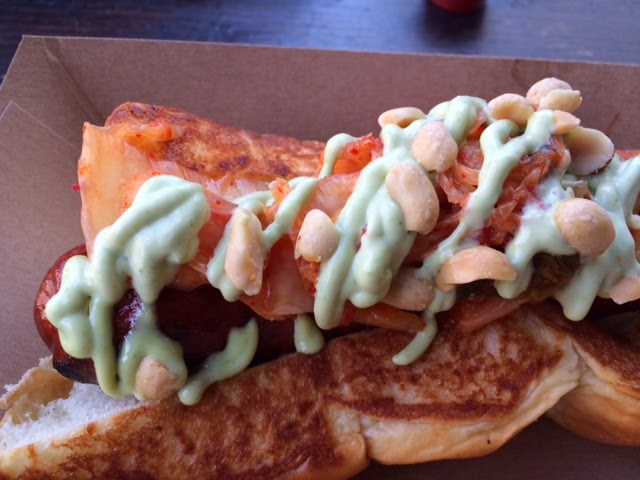 I am normally not a fan of hotdogs, so I was unsure of this place.  Boy am I glad we stopped in.  Only a block away from Stone’s Tasting Room, we opted to skip booze but it has a HUGE selection of draft beer sure to satisfy anyone’s quench. 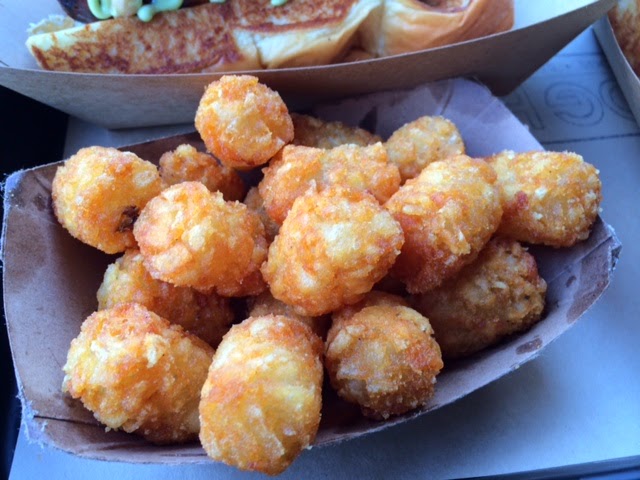 I ordered the Thai currywurst.  It had thai chilis, kim chee and thai basil sauce all piled on hawaiian rolls.  It was amazing.  I have been obsessed with currywurst ever since I visited Germany, and this was a unique take on it.  I was afraid it would be too spicy, but it was just right.  Wash it down with the tater tots and you have the best meal ever! 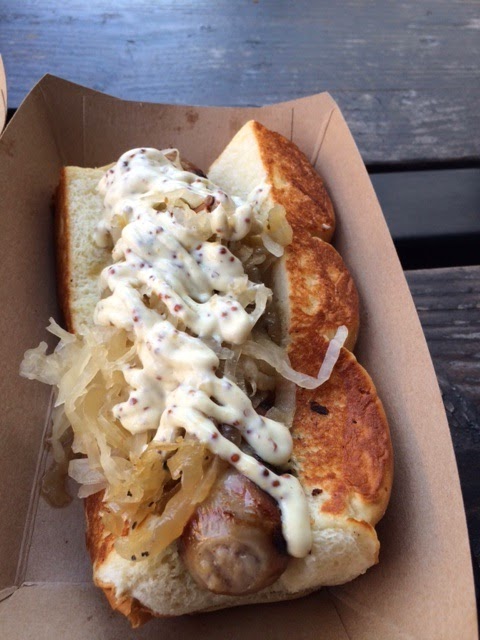 My boyfriend got the Das Brat which is a bratwurst on a hawaiian roll with grilled onions, sauerkrat, and creamy mustard (he opted out of the American cheese).  It was okay.  The mustard needed to be tangier and the roll was too sweet for the brat.  Choose something else, and I am sure it will be better.
4.5 sausages because my meal was awesome!
Best news ever guys, this place is coming to Santa Ana this summer!
Santa Ana is the hipster mecca of OC these days.  When I found out a new sandwich shop had arrived I was overjoyed.  San Francisco had more delis in one district then South OC has in its entire vicinity.  C4 is definitely a welcoming sight! 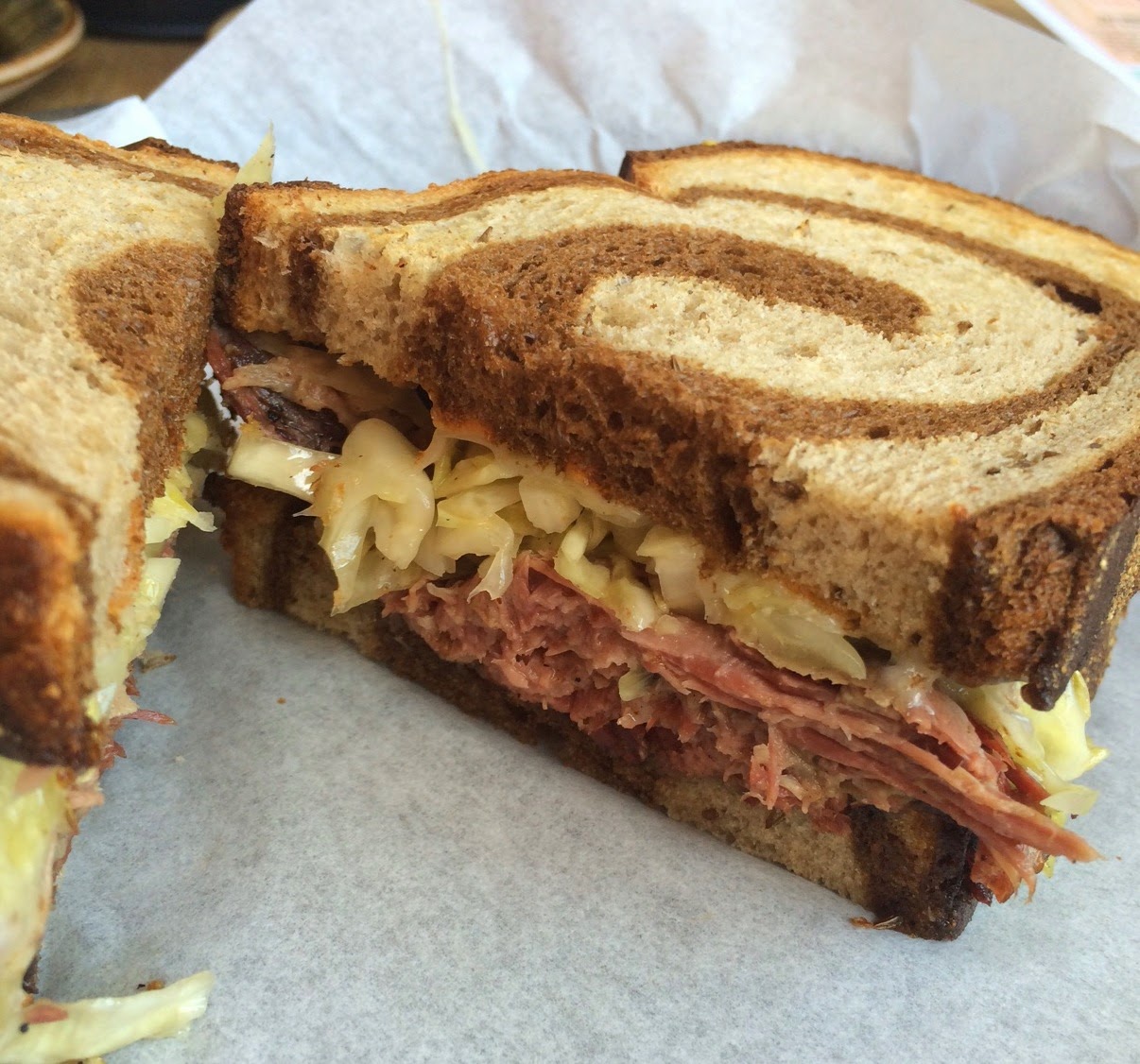 1.  Clean, yet art deco appearance.
When you think hipsters, you usually think unshowered, unclean, vintage clothes, and obnoxious tats.  Well C4 has done a great job at giving you a retro vibe while keeping it clean and classy. 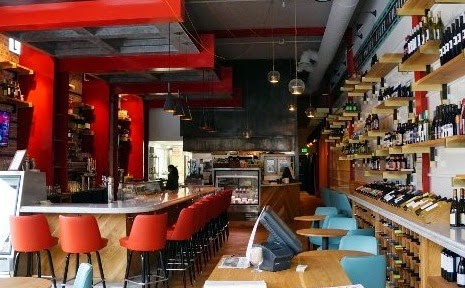 2. 16 rotating handles and wines on tap as well as bottles you can purchase for in-store consumption.
I love a place that has more than just Sierra Nevada on tap.   After spending a night with frat boys ordering bud light, I could not be more thankful that C4 is as far from the Peninsula as possible. 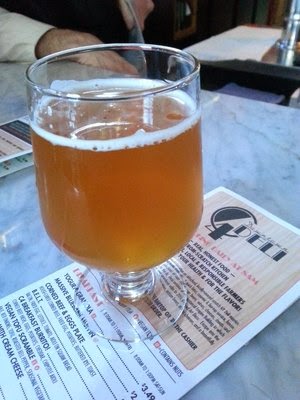 3.  The price is right.
Delis, especially “hipster” ones could be super expensive.  If this place was located in CDM it would easily be twice as expensive.  But C4 keeps it reasonable by having sandwiches priced from $5.99-$9.99 and they also even have combos. 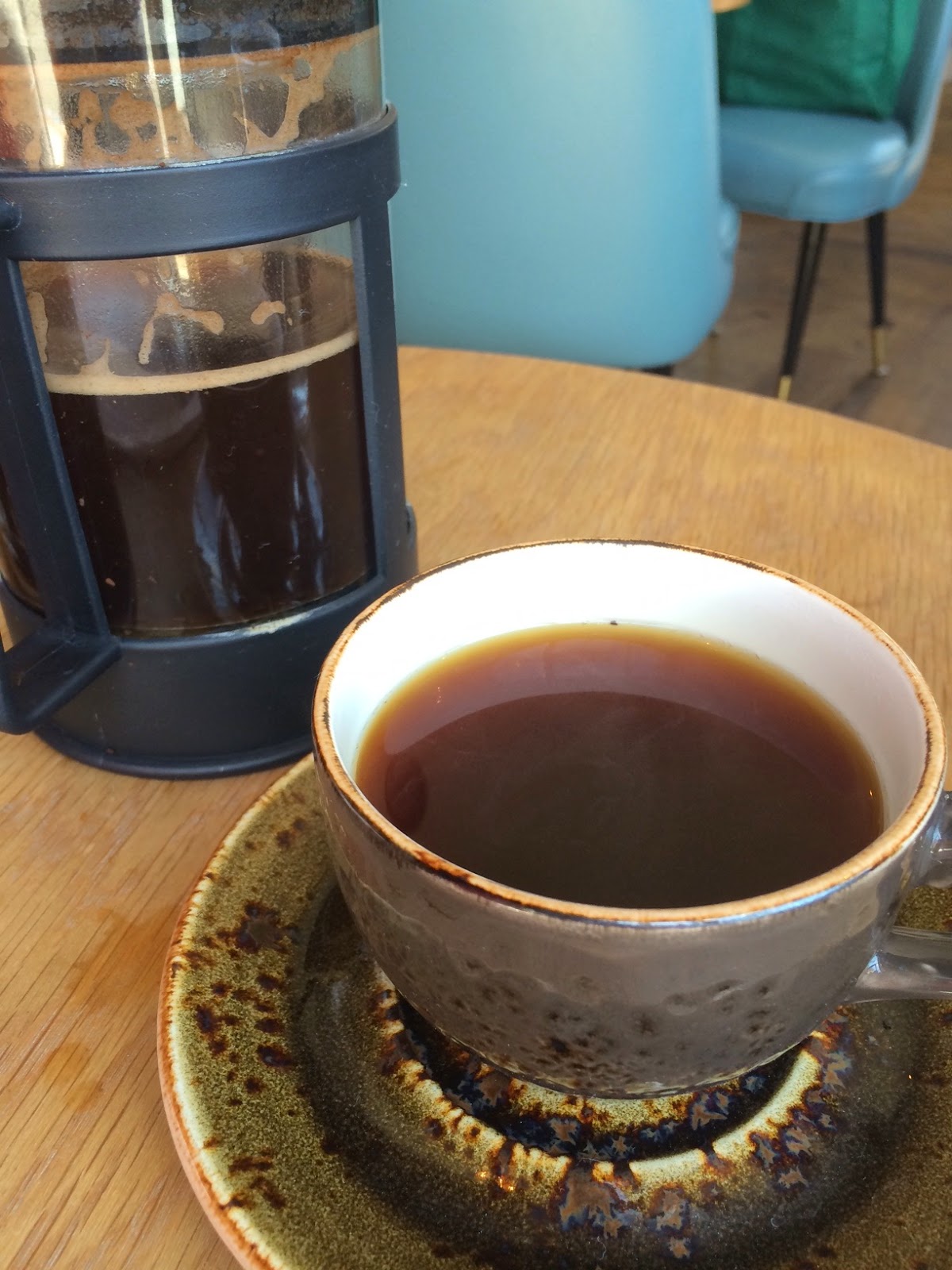 4.  Food is hella good.
Can’t believe I just said that, but SF has changed me.  The sandwiches aren’t too big, but they weren’t small either.  The Rebuen and corned beef were just incredibly moist and tasty, and the sauces were like nothing I have had before.  They pickle almost everything, and their coleslaw was quite unique.

4.5/5 sandwiches – my only complaint was not enough meat on the sandwich.