Okay how corny am I, right? But I needed to catch your attention on this awesome hole in the wall in Tustin.  A coworker recently suggested this amazing spot called Sushi Wasabi for some of the freshest fish in Orange County.  So when my fiance turned 29, I decided to take him out for his favorite food at a new spot.

END_OF_DOCUMENT_TOKEN_TO_BE_REPLACED

As we know, I have a big thing for sushi – HUGE.  So when my friends mentioned reverse happy hour and on a weekend nonetheless, I ran to Tomikawa as fast as my feet could get me there.

The fish here is very fresh, and they have fun rolls that fit every one’s choices.  Downside is that there is no sake/beer special, but this is a family place.  Don’t expect to do sake bombs here – it’s a classy joint.  And reverse happy hour doesn’t start until 8:30.

The best rolls we had were the Rose Roll, the Lion King Roll, the Spicy Tuna Tempura Roll, and definitely get the garlic chili edamame to start.  Add a large Kirin, a great group of friends and possibly an uber (in case there’s more than one Kirin in your night), and you could possibly have the best night that Irvine allows.

I am a huge fan of the Hillstone Restaurant Group and quite frequently eat at Houston’s, R+D Kitchen and Bandera.  So when I was asked to choose a place for my birthday dinner, it wasn’t hard to pick Gulfstream – their “fish restaurant.”  I am so glad I did because I now dream about this meal…

The service alone is why you should go to Gulfstream.  I love restaurants where every server is your waiter, and you can get your water filled the second you put it down.  We were never left waiting, all our questions were answered and the food didn’t sit in the back waiting for someone to bring it out.

We started with the biscuits – only two because it’s a marathon not a race.  HOLY HELL they were good.  Now other restaurants in this group serve jalapeno cornbread which is awesome in and of itself, but these biscuits, wow.  Obviously they were warm and flaky and they have honey on the table or a huge side of butter for fattening up the meal, but they were also herby and not greasy at all.  I ordered the halibut because the waitress said it was her favorite dish at the restaurant, and I HAD to eat seafood here.  My boyfriend, Phil got the fall off the bone goodness that are the ribs.  Both of us stuffed our face.  Needless to say, I licked my plate clean and was so satisfied.  We didn’t have any of the desserts because honestly they didn’t sound that appealing or mind-blowing (and because Sprinkles is next door and I had eaten cupcakes all day – what it’s my birthday!)

4.8/5 food was excellent, service was amazing, hard to not feel out of place with all the older Corona Del Mar people eating around you and for that I ding it slightly.
So now that I work 100s of hours a month, I have to schedule a date night with my boyfriend so that we actually have time to see each other and talk.  It’s a weird concept, this growing up thing.  For our date night, we actually decided to invite some other friends to sushi with us.  (We weren’t ready to spend alone time, jk, kinda.)  We decided to get together at Jack’s Fusion Sushi in Costa Mesa.

The thing I love about this place is that it is good quality fish for a reasonable price.  They have “combo” deals where you can order three rolls for around $20.  Compared to some other places in OC, that is a steal!  They also have a beer and sake deal which obviously is the best part 😉

It gets crowded later on in the night, so make sure you reserve a spot for your significant other and you, or go hoot and holler with some friends.  And the ultimate icing on the cake, America’s cup is next door…(that’s how I got my friends to show up to dinner!) 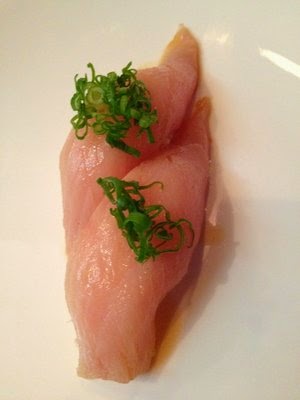 4.2/5 for great sushi and an even better price – worth checking out!
During the week, I try and eat healthy as much as possible because I know that when the weekend comes I won’t be able to say no to all the goodness that restaurants offer.  I have many friends who are able to eat at a restaurant and order a salad, hold the sauce; pastrami sandwich, hold the cheese..etc.  I just can’t follow that rule.  (And I am even lactose intolerant!)  This past weekend was NO different.

I started off the weekend with a low carb diet – sushi.  (I am kidding people. I just recently learned that a sushi roll is as bad for you as a white bread – thanks Alex – but that won’t ever stop me.)  Because it was Valentine’s Day weekend, I decided to splurge and went to a new place called Sushi Sankai.  We ordered a sashimi poki salad, a roll, and a sashimi plate.  The price came to $50 – steep for normal occasions, but fairly reasonable for sushi.

Thoughts?  EXTREMELY fresh fish, especially the hamachi (yellowtail) and salmon. Unfortunately the tuna was a bit hard to eat; the texture just didn’t make it very edible.  But I would recommend for a nicer dinner with parents, a date, or if you are a balla’ shot calla’ – then everyday obvi.
Later on that weekend I tried something different – Korean.  I have had lots of Korean BBQ places, but don’t stray from the meat.  This restaurant was more of a Korean fusion type place.  Hashigo Korean Kitchen surprised me.  It was mild and tame enough for this white girl, but it offered a lot of variety and spiciness for others.  I tried the tofu stew, which was surprisingly good, and I even ate some Kimchi!  But the best thing that I tried were the garlic chicken wings.  Finger lickin’ good!  The tacos were just okay… They also have a Korean burrito that I want to go back for.

The last stop on my International Tour of Orange County was a Peruvian restaurant next to Sushi Sankai (we traveled far this weekend) called Inka Mama’s.  I have never had Peruvian food before (besides Picca, but that was just sad), and wasn’t quite sure what to have.  I was surprised to see that a lot of the dishes incorporated french fries.  I decided on a chicken-veggie dish and was pleasantly surprised.  It might be located in a lot across from South Coast, but its definitely a “must try” place!

What new places are you going to try this weekend?  Going out of town or to an event? Let me know: thelocalslist33@gmail.com
My friends took my boyfriend and I out for dinner at the Boiling Crab this past week.  It truly is a dining experience.  I went straight from work, still in my work clothes (big mistake), and got ready for the feast of a lifetime.  I highly recommend wearing clothes you don’t care about it..or maybe I just spill a lot.  Somehow I managed to spill on myself and my boyfriend in about 10 minutes.

The Boiling Crab is the OC’s version of a crab bake.  The tables are lined with butcher paper and the food comes in plastic bags.  You order different dishes by the pound or can order something called the shebang which is a mixture of them all.

We ordered shrimp, crawfish, catfish, sweet potato fries, cajun fries, corn and king crab.  It was a good variety of what they offer, and I got to try a little of everything.  The point is to share food here people, so if you can’t dig into your friends bag of fish then don’t go here.
Everything was super hot, and very fresh.  I loved the fries of course, but the shrimp was my favorite.  I actually have never had crab before, so that was fun to try and I really liked it.  We got a whole crab so I got to try both crab legs and meat.  My boyfriend’s favorite dish was the catfish.  It was a bit too fishy for me, so he got my extra share.
The bib and all the napkins are just half the fun, but the food is why people keep going back.  Take your most adventurous friends, and share a messy but exciting night out.

It is my addiction to sushi.  Seriously, isn’t this like the fourth place I wrote up?  Sorry people, I will try other places, but I need some more recommendations! (Comment and let me know where I should be eating or drinking at or maybe doing some more educated like visiting an art museum…) 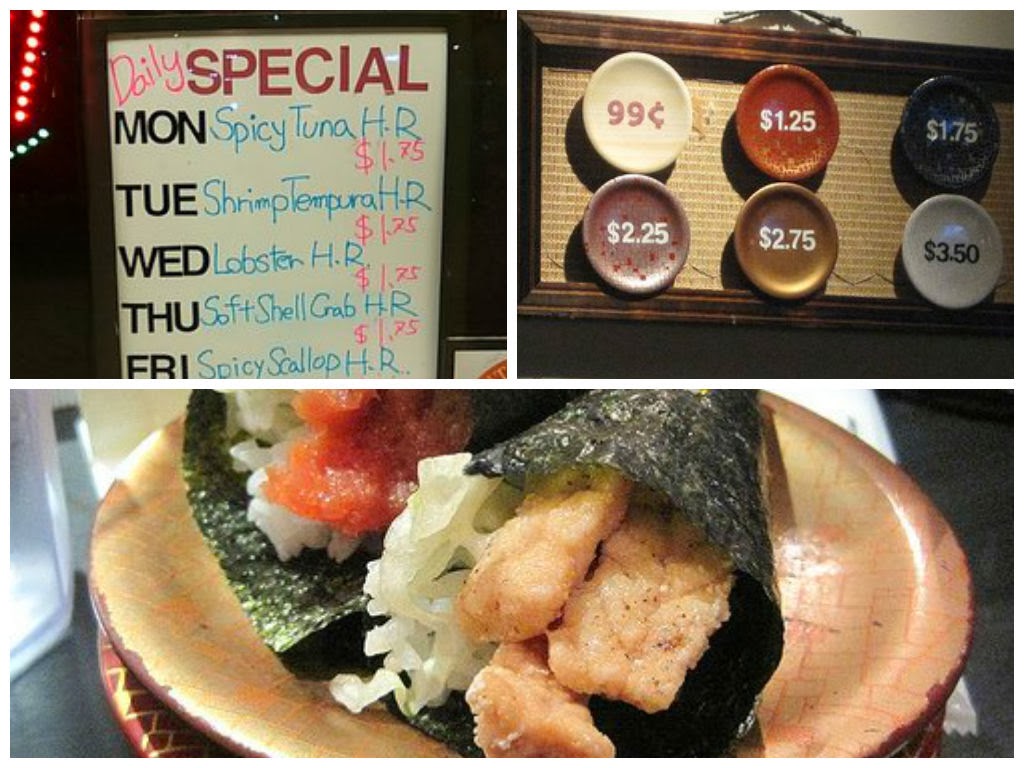 Anyway, I found another hole in the wall place – Kaisen Kaiten.  This means decent prices and usually just okay sushi.  Wrong, wrong, wrong.  This fish is super fresh.  And unlike other places I have mentioned, the sushi chefs are actually Japanese.  The waitresses have to wear horrible kimonos and the place is technically a revolving sushi place and it smells horrible inside, but believe me when I say its worth it.

This place does the “pay by the plate” deal, where they stack your plates at the end to determine what you ate.  I don’t recommend anything on the revolving sushi.  It’s gross and its for amateurs.  Sorry it’s the truth.  The real deal is ordering from the menu.  I recommend the yellowtail and tuna as always, but the hand rolls are the real specialty.  A lot of sushi places have hard, crunchy hand rolls.  Here, they do it right.  You get out of there for a decent price and they have beer happy hour specials Monday-Friday.  Luckily its around the corner from my house…thank you god.